Saturday was a nerve racking day for me as in the evening I got invited out for a works do, which is something I’ve never done before… Even though I’m quite open online, I’m quite shy in person, and also get a bit of anxiety in public.

I decided it best to relax for a bit before going out, so I spent Friday night padded, and ended up dropping a rather large stinker in it… To be fair, I needed a shower before heading out regardless, so all was good, I also took a pic for you hehe.

When I went out with my colleagues I was quite nervous at 1st, as there were a few of them I’d never met, but once I got talking I got a lot more comfortable, and thoroughly enjoyed my time while out.

We had organized a 3 course meal for us all, I ended up going for a soup starter, turkey meal as a main, and due to a couple of peeps needing to leave early I ended up nomming 2 and a half chocolate log cakes for dessert (I was a little bit of a piggy hehe).

I decided to leave the event not long after the meal as it was forecasted to throw it down, and I hadn’t brought a waterproof coat… I’m glad I left when I did, ‘cuz it started spitting on the way home, then though it down a few minutes after I got back.

Once I got home I padded up and relaxed for the rest of the night, I ended up going to bed a little early ‘cuz the event kinda tuckered me out… When I awoke this morning, the amount of food I had to eat definitely took effect, here’s a few pics to show how much the food did its job. 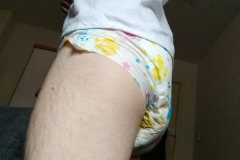 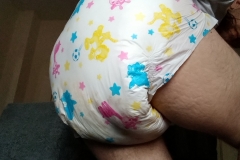 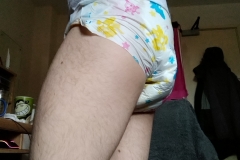 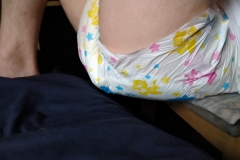 The first two pics were taken after I 1st went, it kinda could me off guard to the point that I didn’t even get time to pull my phone out to record it.

The second two pics were a bit later in the day, after I’d wet the back and somehow loaded it even more… This thing was rather packed when I went and changed.

Speaking of changes here’s a pic of the diaper bagged up afterwards, It was that full that it kinda exploded a little when I sat down to change… I sat down in the shower cubical to be on the safe side since I knew just how full it was.

I also decided to have a little play with the bokeh setting on my phone, so it ended up looking a little more artsy than my normal pics.

Before you say it, yes it is standing on a roll of potty paper (My phone didn’t wanna kick in bokeh with it just sat on my bed).

That pretty much catches up with how I’ve been for now… Wait, nope I’m lying, there is 1 more thing… I’d mentioned in my previous post that I was going to go and get my bike fixed, well that didn’t happen…

It turns that every cycle place around here aren’t doing ANY repairs until January… So I’ve decided to just put up with my bike as is, and save every penny I can to hopefully get a new one come payday in January. I could in theory get one this pay, but I plan to visit my Mum over Xmas, so I’m putting it off ’till next month.

Okay, now we’re caught up… Hope you enjoyed this little post, and remember, Have fun, & Keep stinking up the place. 😜

Any cookies that may not be particularly necessary for the website to function and is used specifically to collect user personal data via analytics, ads, other embedded contents are termed as non-necessary cookies. It is mandatory to procure user consent prior to running these cookies on your website.